During the operation, the capsules in the charging hopper at the first station are fed through two hoppers vertically to capsule-feeding plate one by one. Then capsules are fed to the outside end of straightener by a horizontal fork and fed to the die assembly by vertical fork and pull of vacuum. Then split caps and bodies. At Station 2, the die assembly is lowered and moved outwards. At Station 3, pellet unit is installed for filling slow-released pellets. At Station 4, powder is filled (medicine powder is filled and pressed for five times and then fed into the body). Station 5 is left for station expansion. At Station 6, suction system cleans defect capsules (cap and body not split). At Station 7, the lower die assembly moves inwards and upwards simultaneously. At Station 8, locking pushrod moves upwards to join the filled capsules. At Station 9, the joined capsules are ejected and collected. At Station 10, the die holes are cleaned with dust collector to prepare for entering next cycle.

The control system adopts the imported advanced & famous electric elements as the heart of this machine, with the tactile sensor as the operation panel and frequency conversion speed stepless adjust equipment, the machine is consummate and exquisite. 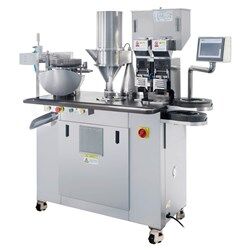 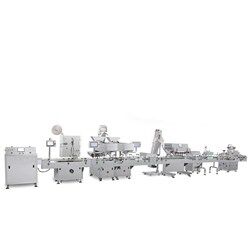